Rumors have been flying wildly around that Google would be announcing a new mobile payment system in conjunction with its Android-based smartphones.  It’s actually something that I’ve been predicting for a couple of years now. Well, today at a live event in New York City, the search engine juggernaut made its official release that their NFC-based technology will be rolling out in some beta markets across the country.  Starting in NYC, then San Francisco and other major markets, Google will be equipping both consumers and retails with the ability to pay with mobile phones.  Using NFC technology (near-field communications), a person owning an Android-based smartphone could simply checkout and pay by swiping their phone over a NFC reader.  Somewhat similar to radio waves, the phone emits a signal and the reader processes it.

Working predominately with CitiGroup and MasterCard, the program will be released to vendor in stages, with some of the bigger names being Macy’s and Subway.  Of course, this system won’t be available to EVERY Android mobile phone user.  It seems that the only major carrier that is partner with Google on this is Sprint.  Will the other 3 major carriers adopt this platform?  Time will tell, but apparently these other carriers have deals in place with other similar concepts.  However, I am of the opinion that the carriers will want a piece of this financial pie and with over 400,000 Android phones being activated every month, the pie continues to get even bigger. 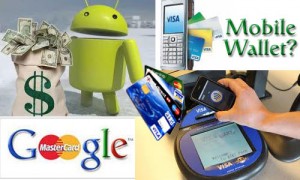 It is hard to say if NFC mobile payments will take on immediate, mass public acceptance.  People are still quite hesitant to change and identity theft and credit card fraud still remain a major issue.  So security will probably be the biggest concern for consumers.  Android phones already have the ability to securely protect information held within it, but it requires the user to activate this feature.  It other countries, the ability to pay by mobile has been around for quite some time.  In order for Google Wallet to succeed, it will require a secure and widespread infrastructure.  It means merchants and business owners are going to need to have access to NFC mobile payment devices.  I imagine there will be quite a rush of new NFC readers coming into the market over the coming months.  If you own a business, expect a call from your merchant account services provider to get a free or paid upgrade to your current equipment.  Also, Sprint only has one phone that is currently equipped with the NFC mobile payment technology, the Nexus S.  That means we should also see a flood of new smartphones hitting the markets with NFC mobile phone payment features.

Why you should be focused on mobile marketing as a local business owner!

Doesn’t this news give you a clue that the mobile phone is quickly becoming the center of the marketing universe?  People are so attached to their smartphones in so many ways.  With the proliferation of mobile applications, mobile games, the increase in mobile advertising, and internet computing features, it may not just be the end of the wallet but also the traditional laptop!  The quick adoption of the Kindle replacing books is another clue.  So our questions to you are these:

So will the Google Wallet mobile phone payment technology replace your physical wallet?

We predict yes.  However, we don’t see it happening for another 3-5 years.  The only reason we think it will take even that long is the security issue and the fear people would have from either losing their smartphone, or, worse yet, being attacked by would-be thugs for the financial info held inside.  If Google Wallet can address these issues, we are of the opinion that Google Wallet is here to stay.  How do YOU feel about this new NFC mobile payment technology?  Will you adopt it?  Do you think Google is being too invasive? Please leave a comment below!

Technology at its finest!

You got a very great website, Gladiola I discovered it through yahoo.

You got a very great website, Gladiola I discovered it through yahoo.

40 N Central Ave Ste 1400R
Phoenix, AZ 85004
Phone: (602) 910-6300
Url: http://www.LocalBusinessRockstar.com
Email: info@localbusinessrockstar.com
Local internet marketing in Phoenix AZ that offers small business marketing services to companies of all sizes. We can help you solve the problem of "How can I get more customers for my business?" We work with companies anywhere on planet Earth, so please give us a call to see how we can help you create an online marketing system that ROCKS!
cash, check, credit card, invoice, paypal