[EDIT:  New video at the end of the post reveals Google Places changes in the WILD!]

I was doing some research for one of our large clients who is in the process of becoming a national franchise in the US, and did a routine Google search for the generic term “pest control”.  I thought something had gone wrong with my computer screen!  Then I checked my Firefox browser plugins to ensure that I didn’t have something active that I might be using for research that might change the CSS of my screen.  However, neither one of these was the cause for the result that appeared in the Google Places listings.  Would you like to see what I saw?  Here you go: 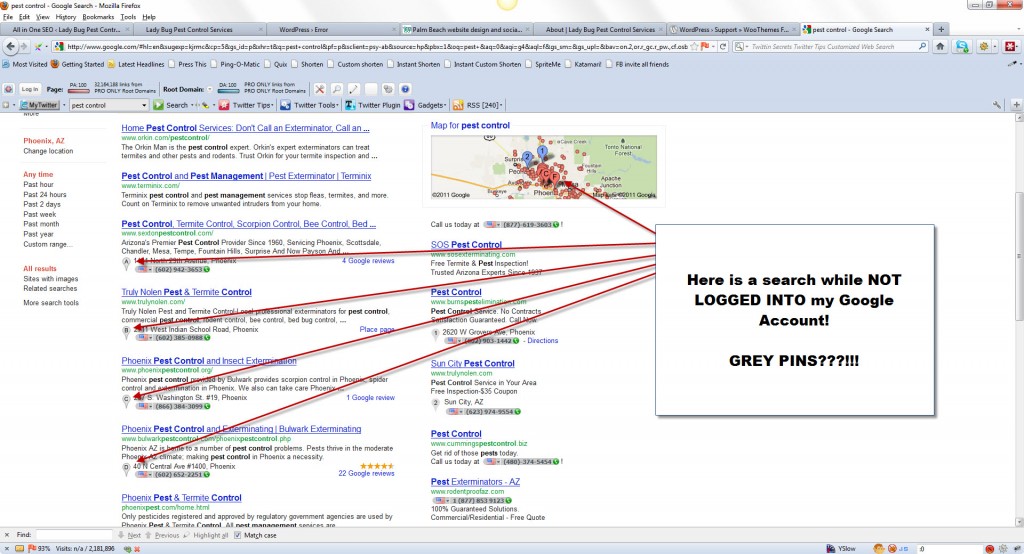 Google Places Changes Pin Color! I was just a little shocked here!  The Google Places pin color has always historically been known as red!  If it isn’t red in the Google SERPs, then it will be blue to reflect that this Google listing is a paid advertisement.  In fact, you can now see how Google Places has customized the Map itself.  Here the pins are still red and blue and the layout has changed and takes up less space.  Hmmm, wonder if this has anything to do with trying to reduce the area the old map took from the paid ads in the right side bar?

Then, I immediately remembered an article that I read about on SEOMoz discussing how Google changed a feature in its Analytics platform based on whether the searcher was logged into their Google account or not.  So I proceeded to log into my primary Google account.  I went back and did the same exact search.  Guess what happened to the Google Places listings?  Watch this: 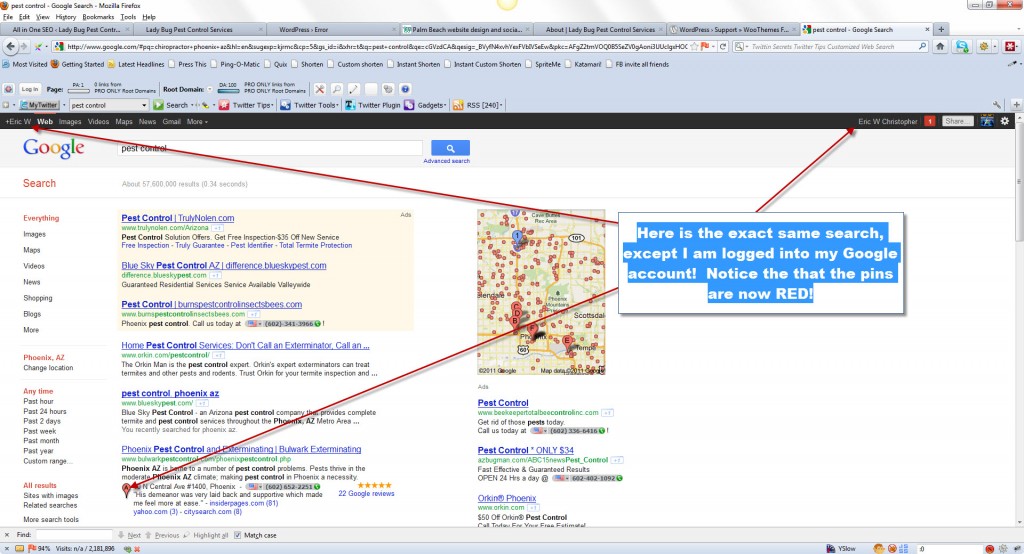 Google Places Changes Pin Color to red again!  Now, of course, this could be Google running some algo tests to determine whether or not this is a permanent change.  I am going to bet that this will be permanent.  Here’s why….  Google is the number one search engine because it does a better job than anyone else providing useful and relevant results to its users.  That is why businesses are willing to pay tens of thousands of dollars for advertising space.  If users stop using Google, then advertising dollars will go somewhere else.  So Google is going to continue to show local Google Places listings in its SERPs if it feels that the search has local intent.  But by showing grey results, several interesting thing might happen:

I find it interesting that the traditional Map still reflects the traditional red and blue pin colors.  I am willing to bet that the user’s attention will now naturally gravitate to these colorful pins.  Hmmm…. what is directly below these colorful pins on the map?  Paid advertising!  I am curious to see if CTRs of these advert go up.  I’m sure Google will be measuring!

Then it occurred to me that this Google Places listing results might be an isolated incident.  I also noticed that my screen shots did not actually show whether I was really logged in or not.  So I did another search for “chiropractors phoenix az” with NOT being logged into my Google Account: 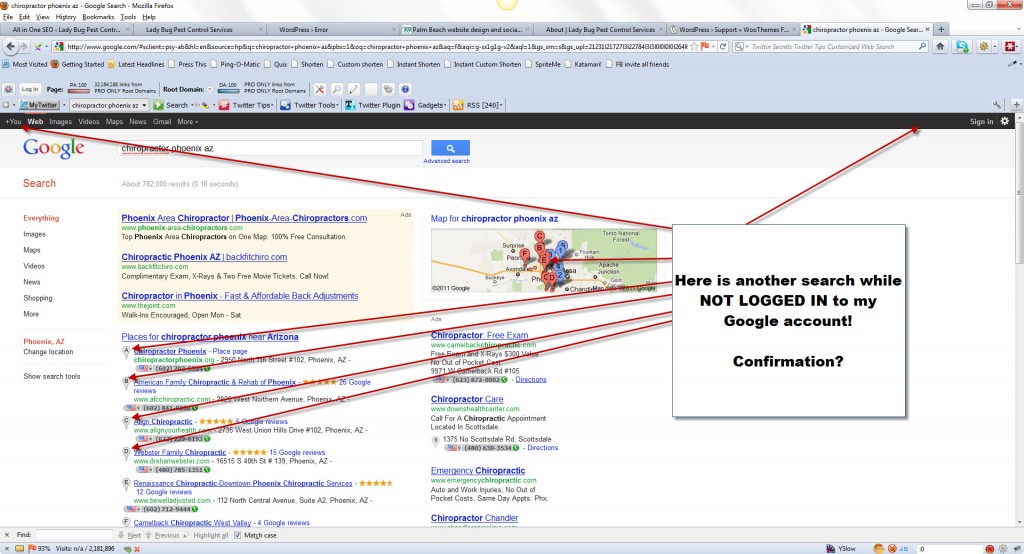 Again, grey pins are showing in the Google Places listings results.  Then I immediately logged back into my Google account and guess what happened?  Check it out: 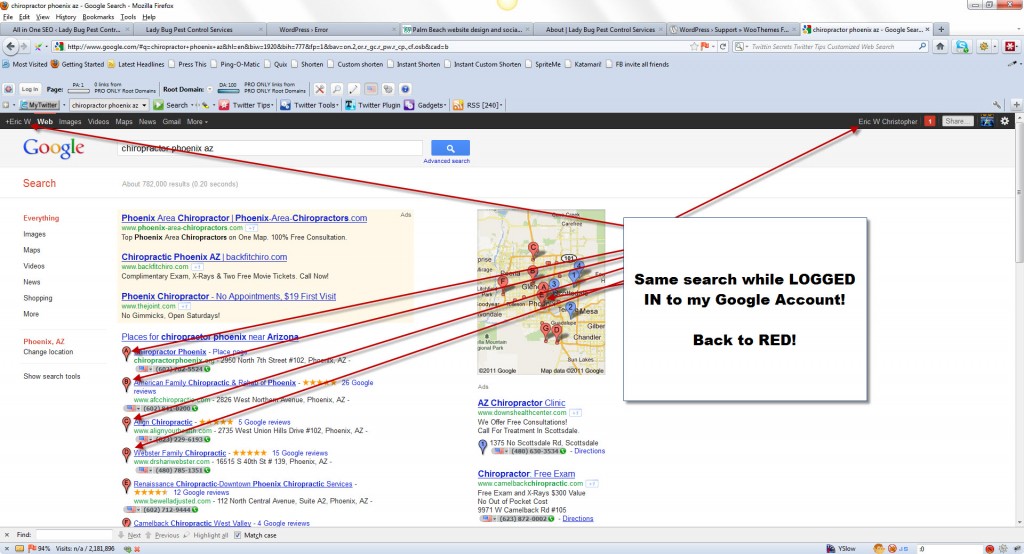 So do YOU think that these changes are permanent?  Do you think they are simply testing right now in Phoenix AZ?  (I will be checking other areas using Proxies to see if this is happening in other markets, but wanted to get this post out asap)  Why do you think Google Places is even doing this in the first place?  If you were Google Places what would you do and why?  Google is making changes all the time, including letting any Google account user to edit and validate information on its Google Places listings.  So, be a ROCKSTAR and leave your comments below!  Oh, yeah, make sure you Google +1 this post, okay?

40 N Central Ave Ste 1400R
Phoenix, AZ 85004
Phone: (602) 910-6300
Url: http://www.LocalBusinessRockstar.com
Email: [email protected]
Local internet marketing in Phoenix AZ that offers small business marketing services to companies of all sizes. We can help you solve the problem of "How can I get more customers for my business?" We work with companies anywhere on planet Earth, so please give us a call to see how we can help you create an online marketing system that ROCKS!
cash, check, credit card, invoice, paypal